Civil Court has quashes the stay order of Khokhar Palace 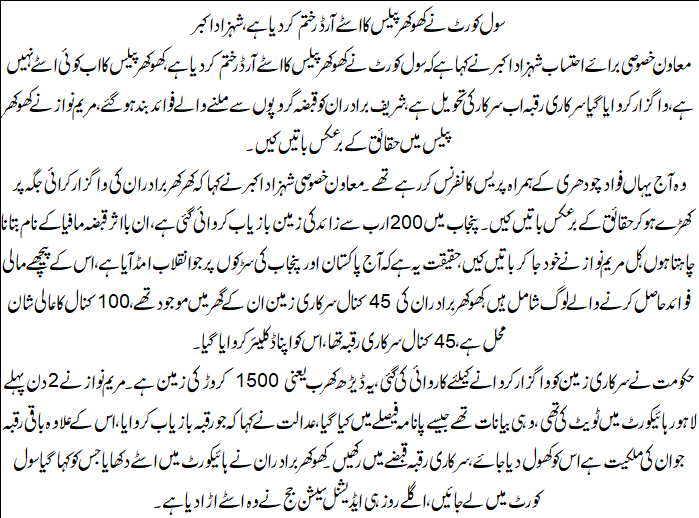 Special Assistant for Accountability Shehzad Akbar has said that the Civil Court has quashed the stay order of Khokhar Palace, Khokhar Palace no longer has a stay, the government area has been handed over to the government. Yes, the benefits of the Sharif brothers from the occupation groups have stopped. Maryam Nawaz spoke against the facts in Khokhar Palace.

He was holding a press conference with Fawad Chaudhry here today. Special Assistant Shehzad Akbar said that the Kharkhar brothers stood in the abandoned place and spoke against the facts. More than 200 billion acres of land have been recovered in Punjab. I would like to name these influential occupation mafias.

The government took action to relinquish the government land, which is one and a half trillion or 1500 crore land. Maryam Nawaz had tweeted in the Lahore High Court 2 days ago, the same statements were made as in the Panama decision, the court said that the area recovered, apart from the remaining area owned by her should be opened, the government area is in possession.

The Khokhar brothers showed the stay in the High Court which was asked to be taken to the Civil Court. The next day the Additional Sessions Judge blew up the stay.

80 Kanal 4 Marla was a commercial property on the outskirts of Lahore, Gujranwala had a pump and CNG station on government land, a park has been set up for citizens, it was occupied by Khurram Dastgir, Daniel Aziz’s father 2400 Kanal, Chaudhry Tanveer to Pindi I took 5,000 kanals of land and 8 kanals of land from Javed Latif.

The benefits of occupation groups to Sharif brothers have now stopped. Federal Minister for Science and Technology Fawad Chaudhry said that it was common in Pakistan to eat and spend, political leadership was protecting its people, Nawaz Sharif was guaranteed Khokhar has given, build buildings and markets by occupying government lands, the occupation was a joint venture between the mafia and the Sharif family.