Everyone’s heard of the 7 Wonders of the World from ancient times. But believe it or not, there is an even more creative architecture that deserves our attention.

We have decided to figure out which creative architecture could complete the list of wonders. We found a lot of them. Just look at these buildings. Our civilization should be proud of these architectural masterpieces.

1. The Kunsthaus Graz in Graz, Austria

The Kunsthaus Grazor Graz Art Museum was built as part of the European Capital of Culture celebrations in 2003.

It has since become a creative architecture in Graz, Austria. Its exhibition program specializes in the contemporary art of the last four decades.

Here we have another great piece of creative architecture:

The Guggenheim Museum Bilbao is a museum of modern and contemporary art designed by Canadian-American architect Frank Gehry. It is located in Bilbao, Spain. The museum was inaugurated on 18 October 1997 by King Juan Carlos I of Spain.

It is one of the largest museums in Spain. In the 2010 World Architecture Survey, this building was named as one of the most important works completed since 1980.

The Markthalis a residential and office building with a market hall underneath, located in Rotterdam.

The building had opened on October 1, 2014, by Queen Máxima of the Netherlands. Besides the large market hall, the complex houses 228 apartments, 4600 m2 retail space, and an underground 4-story parking garage with a capacity of 1200+ cars.

All of these unique features make it an amazing and creative architecture.

Capital Gate, also known as the Leaning Tower of Abu Dhabi, is a skyscraper in Abu Dhabi close to the Abu Dhabi National Exhibition Centre. At over 160 meters tall, the building stands at 35 stories high, with over 16,000 square meters of usable office space.

It is one of the tallest buildings in the city. It was designed to incline 18° west. The owner and developer of Capital Gate Abu Dhabi National Exhibitions Company. The tower is the focal point of Capital Centre (Abu Dhabi)’s surrounding area.

This museum is one of the main attractions of Singapore. Its shape reminds one of the cupped palms or a lotus flower.

It is considered one of the top when it comes to creative architecture.

The 3 skyscrapers in the background with a ship on top of them are Marina Bay Sands, a luxurious hotel and another architectural masterpiece of Singapore.

There is a housing project in the south of Spain where everyone would love to live. Its name can be translated as “red wall,”. The building makes clear references to the popular architecture of the Arab Mediterranean area. Inside the building, the red color switches to purple and blue.

Emporia is a shopping mall and one of the biggest ones in Scandinavia. It is situated in the city of Malmöin Sweden, near Malmö Arena and Hyllie railway station.

Emporia opened on 25 October 2012 and the total construction expense was about 2 billion Swedish kronor.

The building has been decorated with sound design and soundscapes created by Radja Sound Design Agency.

The Heydar Aliyev Center is a 57,500 m2building complex in Baku, Azerbaijan. It is designed by Iraqi-British architect Zaha Hadid.

The center is named after Heydar Aliyev, the first secretary of Soviet Azerbaijan from 1969 to 1982, and president of Azerbaijan Republic from October 1993 to October 2003.

This creative architecture looks like a 3D image but its actually a great building.

9. City of Arts and Sciences in Valencia, Spain

This is one more outstanding example of modern architecture, and it is located right on the water in the middle of the park in Valencia. It looks really futuristic and reminds one of the skeletons of a fantastic beast. The complex consists of 5 buildings:

10. The Atomium in Brussels, Belgium

The Atomium is a landmark building in Brussels, originally constructed for the 1958 Brussels World’s Fair. It is located on the Heysel Plateau, where the exhibition took place. It is now a museum.

It stands 102 m tall. Tubes of 3 m diameter connect the spheres along the 12 edges of the cube and all eight vertices to the center. They enclose stairs, escalators, and a lift to allow access to the five habitable spheres. The top sphere includes a restaurant which has a panoramic view of Brussels.

11. The Cubic Houses of Rotterdam, Netherlands

Cubic houses are a set of innovative houses built in Rotterdam and Helmond in the Netherlands, designed by architect Piet Blom and based on the concept of “living as an urban roof”.

The central idea of the cube houses around the world is mainly optimizing the space, as a house, to a better distribution of the rooms inside.

Its main purpose is to optimize the space inside. Blom tilted the cube of a conventional house 45 degrees and rested it upon a hexagon-shaped pylon. Its design represents a village within a city, where each house represents a tree, and all the houses together, a forest.

12. The Lotus Temple in the village of Bahapur, India

The Lotus Temple, located in Delhi, India, is a House of Worship that was dedicated in December 1986, costing $10 million. Notable for its flowerlike shape, it has become a prominent attraction in the city.

The Lotus Temple is open to all, regardless of religion or any other qualification. The building is composed of 27 free-standing marble-clad ‘petals’ arranged in clusters of three to form nine sides.

The Lotus Temple has won numerous architectural awards and has been featured in many newspaper and magazine articles. A 2001 CNN report referred to it as the most visited building in the world.

13. An incredible hotel in the Alps

This is still a concept, but we couldn’t pass it by. This hotel is planned to be built in the Alps. The building creator is Andrii Rozhko, and he was inspired by the dramatic mountain landscape. The hotel hugs a rugged cliff-side and has a striking glass facade.

14. The Lotus Building in Wujin, China

Blooming out of an artificial lake at the center of Wujin, China is the Lotus Building. The beautiful building takes its name and form from the blooming lotus flower.

The architect’s idea was to create an amazing atmosphere, despite the weather or the season. The building is home to departments of the city’s planning bureau. 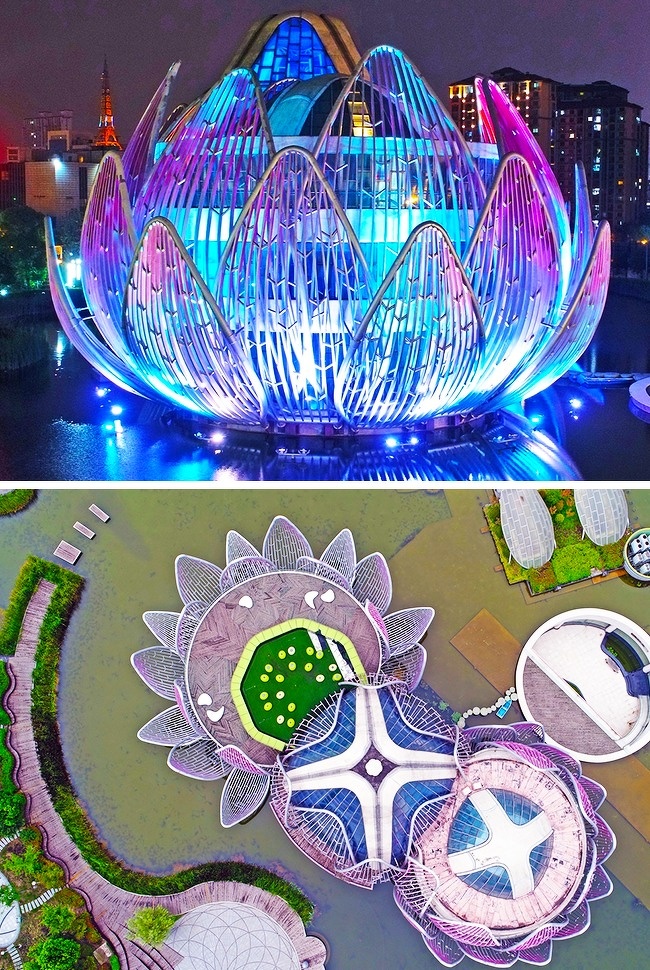 Let us know which buildings impressed you the most?

Argument gets spiced up between Saleem Safi and Fawad Chaudhary