Indian efforts to blacklist Pakistan fail, decision to keep it on the gray list 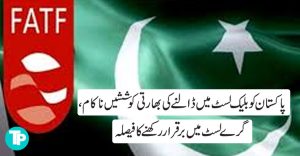 Addressing a press conference at the end of the FATF meeting, FATF President Marcus Pleyer said that Pakistan was not being blacklisted but Pakistan would remain on the FATF gray list. 21 out of 27 points have been implemented but Pakistan will have to implement the remaining six points in any case. 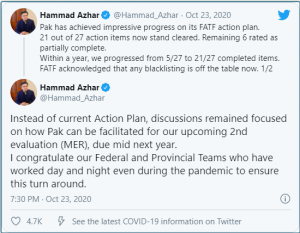 The FATF President said that Pakistan would be kept on the FATF gray list for the time being till February 2021 and it would be reviewed before the next meeting that Pakistan was implementing the remaining points. Yes , a team will visit Pakistan to assess the ground realities once the implementation of the 27 points is ensured by Pakistan.

On the other hand, in a press conference, FATF President Marcus Player said that Iran and North Korea have been blacklisted in the FATF virtual meeting, while FATF has named Iceland and Mongolia. Removed from the list.

Pakistan succeeds in getting huge relief in loans from G20 countries

KP Govt Decides to build a motor sports arena in the province.