Here we have a list of real inspirational stories that can be used by Hollywood.

Sometimes real life can produce stories that are hard to believe in and it becomes inspirational.  Like an actress who fell in love with a homeless alcoholic and they’re happily married now.

Or an American woman who adopted a handicapped girl who eventually became a famous athlete. All these stories could be great for a movie screen. Just read them and see for yourself.

A Swedish actress and journalist fell in love with a homeless alcoholic and they’ve been happily married for 10 years so far.

Emmy Abrahamson, 41, from Sweden, was in Amsterdam in 2006 when Vic Korcula, a stranger, approached her. She says that despite being struck by his beautiful brown eyes, she knew immediately he was sleeping rough because of his dirty clothes and hair. She immediately understood that he was homeless.

She never thought she would see Vic again. When Emmy had to return to Vienna, she suspected she would never see or hear from Vic again, but three weeks later he called her.

10 years have passed since then, they’ve gotten married. They have six-year-old twins, Desta and Til. The man quit drinking and became a mechanical engineer. Emmy wrote a book about their love which became a bestseller.

An old lady from the Spanish town Borja ruined a fresco of Jesus Christ, and the town became rich thanks to tourists coming to see it.

In 2012, elderly lady Cecilia Giménez restored a fresco of Jesus Christ called “Ecce Homo”. It was painted in 1930 by ElíasGarcíaMartínez. Her work became a global laughingstock. Cecilia’s work attracted a lot of attention.

The story became so inspirational that people were willing to pay to see the new “Ecce Homo”. Part of this money goes to support the local retirement home and Cecilia herself. She has to take care of her ill son who has cerebral palsy.

The entire town with a population of 5000 also lives on the earnings from tourists who want to take a photo of the painting and its restorer.

2 girls went on a short yacht trip but ended up having to drift in the ocean for 5 months before being rescued.

2 American women, Jennifer Appel, and Tasha Fuiava had decided to take a sailing trip from Hawaii to Tahiti. They took their 2 dogs and set sail from Honolulu planning to be at their destination in 18 days.

Also Check: 13 Examples Of Taking The Grammar Nazi Trends To A New Level

They had an engine casualty during bad weather but continued on, believing they could make it to land by sail. They also began to issue daily distress calls but they were not close enough to other vessels or shore stations for them to be received.

They even had an incident where the yacht was attacked by sharks. Tasha and Jennifer had spent the entire 5 months in the open ocean eating rice and oatmeal and using water purifiers for fresh water.

They were eventually found by Taiwanese fishermen 550 miles from the Japanese coast and rescued by the U.S. Navy. By that time the girls had almost finished their supplies and had lost all hope that they would survive.

The whole incident became an inspirational story for the locals. 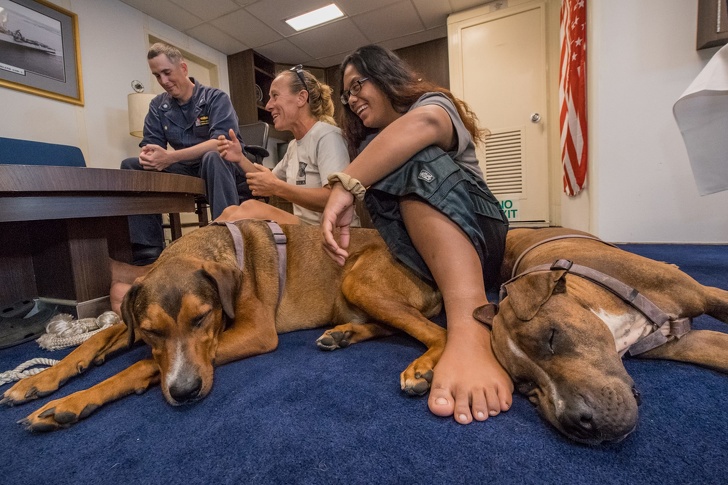 Did the PMLN Prime Minister of AJK Just call himself an…

An American woman adopted a handicapped girl who became a famous athlete.

Oksana’s had been abandoned by her real parents at a Ukrainian orphanage right after she was born. They didn’t want to have a daughter with different leg lengths, webbed fingers with no thumbs, and 6 toes on each foot.

The girl was beaten in the orphanage and she often didn’t have food to eat. A speech and language pathologist at the University of Louisville, Gay, saw the photo of little Oksana.

She could not get her out of her mind. Oksana was then adopted by Gay. She had spent 2 years trying to adopt Oksana.

In the USA, both of Oksana’s legs were amputated. Her mother pushed her to try sports, including a growing group for children with disabilities. Oksana became so good at it that she won the bronze medal at the 2012 London Paralympic Games.

Then she tried herself in winter sports and became a cross-country skier winning the silver and bronze medals in Sochi in 2014. Oksana is also a cyclist.

Take a look at the 5th Inspirational story:

A woman left her husband and their 3 children to live in the jungle.

In the 1970s, an anthropologist, Kenneth Good, had studied the Yanomami tribe who lived in southern Venezuela. He learned their language and then married a tribe girl named Yarima. Both were moved to the USA. The couple had 3 children.

Yarima felt lonely in New York and when their eldest son David was only 5 years old she decided to return to the Amazon rainforest.

David couldn’t understand why their mother had left them. Then he read his father’s memoirs about the Yanomami tribe and Yarima and realized that he wanted to meet his mother. After 3 days on the Orinoco River, he eventually reached the village where his mother’s tribe lived.

It was the first time he saw his mother after 20 years of living apart. The meeting was really touching, both the mother and the son cried. Currently, David studies the culture of the tribe and is proud that he is half Yanomami.

The last and the most inspirational

A man and a flock of seagulls ruined a hotel room. The hotel management granted them a pardon but only after 17 years.

In 2001, Nick Burchill from Canada was on a business trip and stayed in the Fairmont Empress Hotel in Victoria. This town is famous for its “Brother’s Pepperoni” and Nick’s Navy buddies asked him to bring some for them.

Nick had a suitcase completely filled with pepperoni for his friends and he needed to keep it cool.

The hotel room didn’t have a fridge so he put it on the window sill near an open window and left to go for a walk. After 5 hours, when he returned to his room, he discovered a flock of seagulls inside eating his pepperoni.

The room was covered in seagull feces. When the seagulls saw Nick they immediately started flying around and crashing into things.

They tried to leave the room through the small opening by which they had entered. Eventually, all seagulls left except for one.

Nick had to throw his shoe at it. At this point, Nick was supposed to be at a very important business dinner. But he had to retrieve his lost shoe from the street, unfortunately, it was wet.

He decided to dry it with a hairdryer but it fell in a sink full of water which killed the power in the hotel. His room was also completely destroyed. After that, Nick was banned from the hotel forever.

After 17 years, Nick wrote a letter to the hotel management asking for a pardon. He described that the events and the management granted him a pardon and allowed him to come there again.

Let us know which of these inspirational stories you liked the most. Leave a comment below.

Govt to Launch Five-year roadmap – A guide to Development