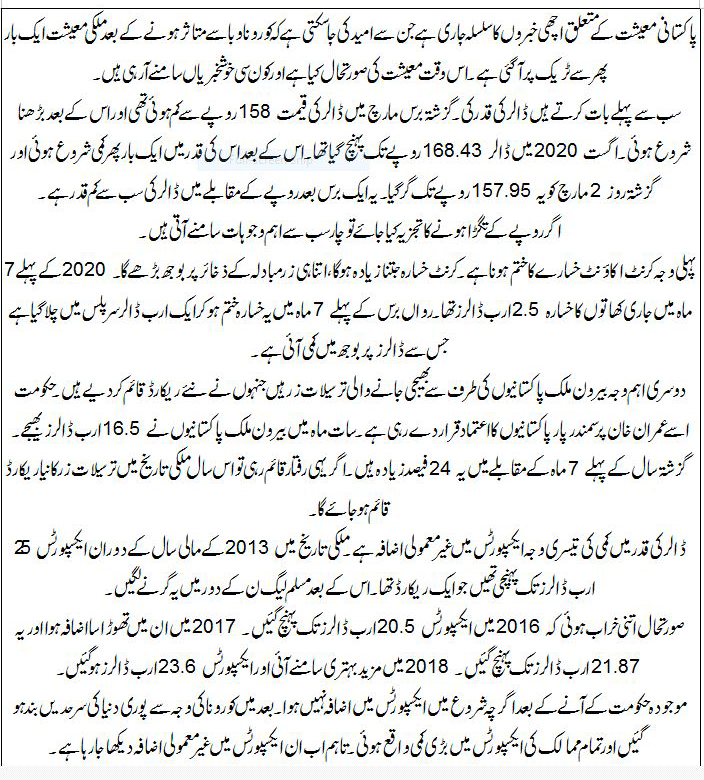 There is a series of good news about the Pakistani economy, which can be expected to get back on track after the Corona epidemic. What is the current state of the economy and what is the good news?

An analysis of the strength of the rupee reveals four main reasons.

Another important reason is remittances from Pakistanis abroad who have set new records. The government is calling it the trust of overseas Pakistanis in Imran Khan. In seven months, Pakistanis abroad sent 16.5 billion. That’s up 24 percent from the first seven months of last year. If this momentum continues, a new remittance record will be set in the country’s history this year.

A third reason for the dollar’s depreciation is the extraordinary rise in exports. Exports reached a record 25 billion in the country’s fiscal year 2013. After that it started falling under PML-N.

Exports have not increased since the advent of the current government, though. Corona later closed the world’s borders and caused a sharp drop in exports from all countries. However, now these exports are seeing an extraordinary increase.

During the eight months from July to February, exports stood at 16.30 billion. Significantly, in the last five months, exports have consistently exceeded  2 billion, which is unusual. If this trend continues, it could reach 25 billion again in the 2020-21 fiscal year, with a further increase next year, a new record in the country’s history.

The fourth major reason is the steps taken to get out of the FATF’s gray list, which has led to a significant reduction in the flight of the dollar abroad. At the same time, Pakistanis abroad have sent huge sums of money to Roshan Digital Account, which has strengthened the rupee.

Pakistan’s foreign exchange reserves have been stable at  20 billion for several weeks. In addition, large-scale manufacturing has increased by 7.41%, which means that the wheel of the economy has begun to turn. This will not only increase domestic production but also create employment opportunities and reduce poverty.

At the same time, tax collection is a fundamental issue for any country. The more taxes the government receives, the more it will be able to spend on public welfare.

In the last eight months, the FBR has collected more tax than its target. So far, tax of Rs 2900 billion has been collected while the target of FBR was Rs 2898 billion.