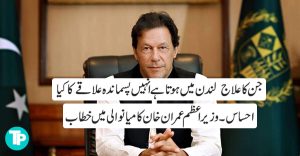 PM Imran khan was Addressing the inauguration ceremony of Namal Knowledge City project in Mianwali, PM Imran Khan said that there were no girls’ schools here, nor were there any nurses and lady doctors in the hospitals. Has ordered the hospitals here to recruit doctors by placing advertisements in the newspapers themselves.

The Prime Minister said that nations are not rich by selling cotton and cloth but by spending on education. We are building a world class Namal University in Mianwali which will be a knowledge city, hence the agricultural sector for the whole of Pakistan. But there will be research.

Criticizing the opposition, Imran Khan said that investing money in a city does not lead to development of nations, how will those with medical check-ups and children in London feel the backward areas. The principle of the state of Madinah is that all are equal before the law and the supremacy of the law means that we have to uplift the weak so that no powerful can oppress them.

Addressing IG Punjab Inam Ghani and SP Mianwali, the Prime Minister said that you have to take special care that no poor person is oppressed in the police stations. He who wrongs will be punished, whether he is strong or weak.

The Prime Minister reiterated his commitment that our first focus is to bring backward areas like Mianwali, Dera Ghazi Khan and Rajanpur to the forefront so that there is education, hospitals and police to help the people.

Also checkout: Pakistan Won’t Be In Blacklist – 21 Out Of 27 Recommendations Implemented

Pakistan succeeds in getting huge relief in loans from G20 countries

KP Govt Decides to build a motor sports arena in the province.