Remittances from overseas rise by 15% in 3 months – Asad Umar

The minister of Finance Asad Umar has unveiled the statistics of remittances from overseas Pakistanis.

The minister of finance has mentioned these stats during his speech in the national assembly of Pakistan.

He said that the overseas Pakistanis have sent an additional one billion dollars to Pakistan during a three months period. 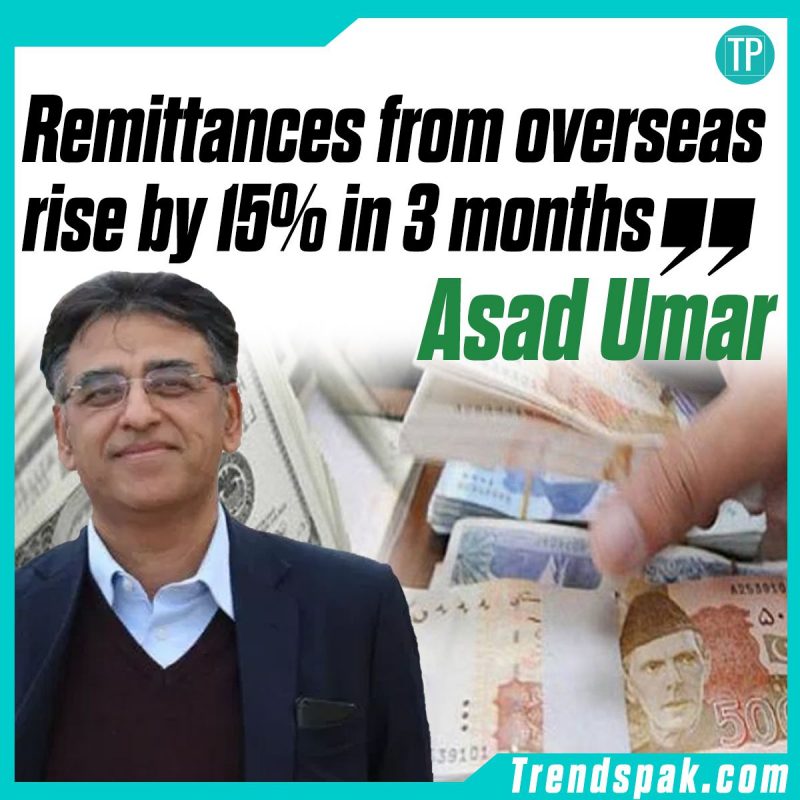 Asad Umar assured the nation to sign the agreement with the International Monetary Fund (IMF) that will suit the nation and economy of the country.

Speaking in the National Assembly, the Minister said that government will not sign the agreement in pressure.

The government is not in a hurry for the IMF package as alternative arrangements have been made to address the immediate economic needs of the country, he maintained.

Priorities when it comes to IMF

The Finance Minister said that Pakistan has already signed an economic assistance package with Saudi Arabia while talks with other friendly countries are underway.

The Minister said that questions regarding NRO were asked. People doubts NRO but NRO has been a part of Pakistan’s history.

Pakistan’s first NRO was the one in which an agreement had been signed with the dictator and even after 7 years, there had been no cases.

It is because the opposition leader along with his family members had gone abroad and there were no possible proceedings.

Earlier, the opposition leader said that nobody can file a case against them, not even the dictator. The Minister criticized and said:

“Cases cannot be filed because you had left the country after signing the NRO and you didn’t even inform your party.”

The Minister talked about the Restoration of Democracy formed in 1983 to pressure the dictatorial regime of Muhammad Zia-Ul-Haq.

Check this one too:

Asad Umar said that there was a time when the opposition leader had said that he will complete Zia Ul Haq’s Mission.

The Minister said, “I am glad that Zia Ul Haq’s mission was not completed, adding that Pakistan will not see that day.”

The Minister told that first time in the history of Pakistan, it was PML-N who had implemented taxes on the diesel which is being used by poor people. PML-N had implemented a 101% tax.

The Minister said they have substantially reduced taxes on the diesel five times lower as compared to the previous government.

He said the government is taking steps for strengthening the economy of the country and we have to take steps to reduce trade, current account, and budget deficits.

The minister said the budget deficit was 4.1 percent in last years but after general elections, the deficit of the budget is now 6.6 percent which is Rs900 billion.

The stats given by Asad Umar on remittances are pretty satisfying. The economy can be boosted enough to get out of the crises.

The amount of money being sent by overseas Pakistanis has been at its highest level.

Business of my sons is not connected with me – Nawaz concludes