Samsung has already started working on the Galaxy A7 and it is called the 2018 version of the device.

It is going to debut at the end of this year or this new series is going at the beginning of next year. Recently its successor launched in the market and now Samsung Galaxy A7 2018 appeared on the GFX Bench and it revealed a lot of features. It also revealed that the upcoming phone will be a high-end device where the price of Samsung’s Galaxy A7 2018 will be more than 500$.

Galaxy A7 features a design with an intelligent side fingerprint sensor for comfortable handling and ease of use. Its premium 2.5D rear glass back casing is both durable and distinctive, blending together functionality and style seamlessly.

The phone comes with a 6.0-inch touchscreen display with a resolution of 1080 × 2220 pixels. Samsung makes some of the best screens and the one on the Galaxy A7 (2018) felt fine for its price. The display is also protected by Gorilla Glass (version unspecified).

The Samsung Galaxy A7 (2018) is powered by a 3300mAh nonremovable battery. We are getting a comfortable one-day mileage with moderate to heavy usage.

Capture more of what catches your eye. Galaxy A7 comes with both 77 and 120 wide cameras. You no longer have to worry about cropping out what you really want to keep in frame. Whether you’re shooting vast landscapes or wedding parties, you now have more room to work with.

Capture clearly even when light may not be on your side. Galaxy A7 features a high-resolution rear triple camera with a low aperture to let more light in and reduce noise when shooting in low-light environments.

24 MP camera is fixed on the front side to make the selfies sharper and colorful just like real life.

Now you can unlock your phone instantly by simply holding it to your face. Face Recognition technology grants mobile access for you to ensure your personal data doesn’t fall into the wrong hands.

You can do two things at the same time. App Pair lets you manage two apps simultaneously, so you can multitask with ease when you want to do more on the go. Now you can stream your favorite video and text without having to minimize the screen. 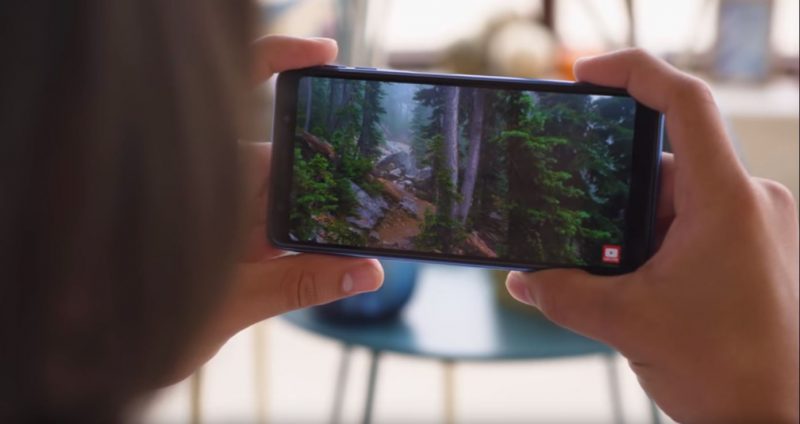 Exynos 7880 chipset is keeping all the functions running without taking a break for a single second.

4 GB RAM of Samsung Galaxy’s A7 2018 is a true friend of the processor which helps the phone a lot in all the multi-tasking and gaming. Another friend of these two is Mali G71 GPU which is handling the graphics of A7 2018 and give you high-end results while playing games.

Samsung Galaxy A7 2018 has a lot of features which you often expect. It has an AMOLED display and ample RAM, also it gives you fantastic photography experience through its camera features.

It can give great indoor camera performance. An accessible side-mounted fingerprint sensor gives it a fabulous look. It supports a large battery of 3300mAh but it does not support fast charging. It performs so well, you can play games without getting your phone hanged. App pair allows you to manage two apps at a time.